How to configure Samba to use SMBv2

Home / Blog / How to configure Samba to use SMBv2

I am a new Linux user and for security reasons and to avoid ransomware, I would like to disable the SMB1 protocol in samba configuration on a CentOS Linux version 7 server. Is it possible to disable SMBv1 on a Linux or UNIX-like operating system?

WannaCrypt/WannaCry targets the Microsoft Windows operating system. The attack spreads by phishing emails but also uses the EternalBlue exploit and DoublePulsar backdoor developed by the U.S. National Security Agency (NSA). If you are using older and unsupported operating systems such as Windows XP and Windows Server 2003, you will get infected. All of your files will be encrypted. To get back your files, you need to pay ransom payments in the cryptocurrency Bitcoin. Microsoft has released software updates for Windows XP and Windows Server 2003. You must apply those patches ASAP. In short Linux/Unix users are not affected by this attack. However, you must disable SMBv1 on Samba server running on Linux or Unix-like system.

Disable SMBv1 on Linux or Unix when using Samba

Samba is an open-source implementation of the SMB or CIFS protocol, which allows PC-compatible machines (especially Windows oese) to share files, printers, and other information with Linux and vice-versa. 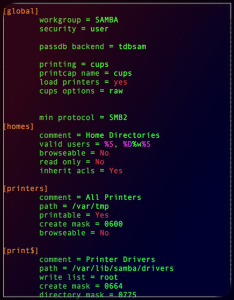 Save and close the file.